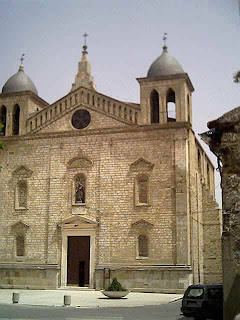 This is the church where I was baptized in the town of Genzano di Lucania, which is the town where I come from.

It is an inborn human need that people need God and pray to God.
As far as I remember when I was young, I have always believed in God and religion, just the way that I was taught from my parents, grandparents, relatives and those religious institutions that I went to when I was young. But I have to admit that I have behaved just like any other teenager when I was in the company of other young men, because I wanted to make believe that I ignored religious beliefs just as they did, so that my friends and other tough people would not ridicule me, because of my religious beliefs, therefore, in a way I have been forcing myself to live most of my life in a half religious vacuum, just because that was the way most of us used to live in those days.
But many things have happened to me since then, and those happenings have changed me in a religious way, because late in my life my religious beliefs have become stronger than ever, so, I had to let go the way that other people want us to behave in a non religious way. Today I have to say that my religious beliefs have become so strong that I had to start writing them. I know that now you want to ask me; what has happened to you that have made you change so much religiously?
Dear reader; I am sure that you would like to know what has happened to me, and I am very willing to tell you. So, I am going to tell you and fulfil your desires by explaining to you everything as much as I am able to explain to you, as I keep writing these posts.
But first, allow me to say that God is great indeed, because God has been the active force that has made happen those things that have changed me, and God has also guided me in such a way that I have become a great religious believer nowadays: And I can assure you that God will guide anybody that wants to be guided from his divine force to do his will, so that they will be enlightened and know the truth about God
So what has happened to me are many God’s driven things, which I am still trying to understand myself fully, and I believe that there are times that these religious happenings have just happened to me for a reason, I have observed these happenings and some of the most important ones I have written down, as these happenings have been the ones that have changed my religious life beliefs.
So, let me explain my present personal situation and make a list of those happenings which are worth writing in hereunder.
1) Perhaps I should start by saying that I had a religious predisposition, but apart from my personal religious predisposition, I have had some very personal religious dreams, which have reinforced a lot my religious predisposition; I have to say that these religious interesting dreams have already been written here in my posts and in Hub Pages in Menfranco Spiritual Dreams, you can link with this link, Cosmic Spiritual Dreams there are also some other minor dreams that I am going to write somewhere later on, as they played a large part in making me a better religious believer.
2) What I am going to say next may seem to be a bit of a contradiction in itself, because during the later part of my life, I had an experience about deep human love, which turned those love feelings into religious beliefs. I would like to tell you a bit more about this love with no physical love happenings. But before I do that I have to inform you that I have learned to write English just because I wanted to write to my sweetheart; therefore I believe that God made me fall in love with this special woman, so that I would start writing my long love letters to her, and in doing so I would have to learn to write to a higher standard. Now the outcome of this love was a one sided love affair and nothing ever happened at all between us: Therefore, those love feelings were turned into religious beliefs, since I started to pray God to help me with my unwanted love. So you see what I mean, when I say sometimes that God works in mysterious ways.
3) If you have read the beginning of my religious writings of, Prayers for Reconciliation, you know that there I had this supernatural encounter, where I was greeted by these supernatural beings as the author of Reconciliation of the Universe; you see, the outcome of this encounter has greatly reinforced my religious beliefs, as I am sure now that there is really something out there that follows us closely and know everything that we do; of course there are also many other reasons why I believe what I believe today, so, I am going to write these other reasons in my next post, the other religious reasons.
------------------------------------------------
Man needs God
Religious beliefs or views
IS TO BE CONTINUED;
Next time with another religious post; the other religious reasons.
------------------------------------
Some similar links in Hub Pages and others
http://frankmenchise.com
http://frank-nrwo.yolasite.com
http://menfranconewworldorder.yolasite.com