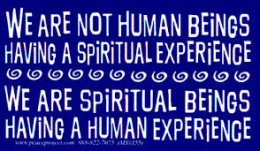 In order to connect to God and the spiritual world we need to believe that we are part of it and that we are able to move from one side to the other side; it may even be just as it says in this sign beside here that we are spiritual beings. 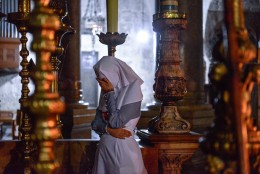 We are human beings and spiritual beings at the same time, it is up to us to fulfil both roles. When we are here on earth, we need to think about our spiritual side and it is helpful when we surround ourselves with spiritual things, and we are able to meditate about it. 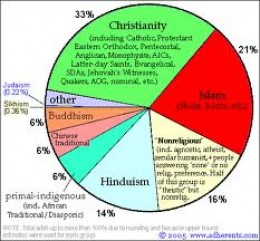 
The spiritual souls
Dear readers, here again I have to say that we are trying to shorten our religious writings, now in order to shorten as much as possible our religious writings, and at the same time try to show as much as we could of the links that would exist in the universe, between God and the rest of the life forces of the universe, here we are going to give our souls the value that we believe they deserve within our imaginary religious world in this article; I know that I could also say several other things that would link our religious articles in a better way overall, but sometimes it is necessary to short-cut something for easiness sake, and this is just what I am going to do here.
Therefore, let us come quickly to the point and let us assume that we all have souls and that the souls of people will influence the spiritual world that interest us most, this attitude might indeed be the right one, because if we assume that a benevolent God exists and he is the life energies that are able to give life to every living thing, then it follows that these life energies should return to God when they die; this does not mean that they will have to go to paradise or hell, it only means that they return to be part of the life forces of God of the universe. The question about paradise or hell will be dealt with later on when we come to write about that.
Now, here we might add that our souls may indeed influence the spiritual strength of the God we follow; now what I have just said opens up another important question: if we assume that the souls of people will influence the spiritual strength of the God we follow, then by default we have to assume that we believe that there are several gods. This view might sound a contradiction of our own religious beliefs, because we have already stated that there is only one God throughout the universe. So, let us try to answer that assumption.
To start with we need to be realistic and see that there are hundreds of religions in the world, we know that the minor religions could be grouped together and their number will shrink to a smaller number, but even after we do that there are still several religions in the world; most of those religions have a god has its head figure because this is how most religions have been set up to make sense to the believers. Therefore, when we say that our souls would influence the strength of the God we follow, this is true, but at the same time we have to assume also that the God we follow is indeed a God, but at the same time this God acts only as the spiritual portal that we belong to and leads to the central life force of God of the universe. This is very likely the way that our souls will return to be part of the life forces of the universe, as I cannot imagine any other ways.
Now what we have said here is that we may have to accept that there are several spiritual forces that people will call gods, in fact people usually will call god any super entity even people themselves have been said to be gods, in a way a god is an entity that is better than the rest; so, if we find that people believe in several gods, it is a normal happening. Now let us see where this will lead us, what is changing around us and where this will take us, in this changing world, spiritual and otherwise.
----------------------------
The changing world
Whichever way we want to look at it, we have to admit that in the world many things are changing as we can bear witness to our own lives here on earth; so let us start to look at how our forebears saw these things. What I am going to say next is going to make you think that I am changing issues and instead of talking about spirituality I am talking plain human issues, but that is not the case, because what I would like to do here is to construct a link between these two issues, so let us see their similarities.
In the beginning the rulers on earth could have been just a single very strong person that would rule as a king or under some other title that would tell the people that he was the boss, so everything that he said had to be done his way, some of these people were even thought to be gods; perhaps this is how the word god came about on earth, and as well as in the spiritual world. In those times these same leaders new about the spiritual beliefs that existed, so they linked themselves to the spiritual gods and they believed themselves that they were really gods and at their death they would go back to become spiritual gods; the Egyptian did that and believed that the Pharaoh was a god and at his death he would join again the gods of the underworld. It was a very convenient way for everybody, until that system would last. Here under is a link that will take you to the ancient Egyptian beliefs:

Spiritual souls
Dear reader, since our main description of our religious writings is going to be our theory of ‘Reconciliation of the universe’, which is going to be set in the imaginary spiritual universe that we could call the spiritual dimension or the other dimension, we are talking about spiritual souls, because it is the spiritual souls that link the living world to the spiritual world, and in doing so we would create a good link, we want to do that because when we are going to talk about the universal God life forces of the universe, our writings will seem to be worlds apart, but if we follow the journey of the souls, then a continuous link is formed and everything seems to fall in the right place, because the soul can be in both worlds, therefore it links both worlds; we would like that our readers feel that there is a constant link between the living souls and the dead souls.
We have been thinking that in order to link the living world to the spiritual world, and then be able to talk about God of the universe, we need to talk about the way that our souls move from this world to the next, that is the way that we have been thought or the way that we have worked out ourselves. Perhaps by writing about our imaginary beliefs how the souls would go back to the life force of God of the universe and through which channels, it could be a good way to go about. So let us see how we could do that using some of deities we believe exist and how many souls these deities would attract to themselves, according to what we believe or are led to believe they are able to do.
So let us start to talk about Christianity, because this is the largest religion in the world and because this is the religion that I follow, since I am a Roman Catholic person. Anyhow, while I am writing this article here, there are no doubts in my mind that Our Lord Jesus Christ is the main portal for the souls of people that move back to the life forces of God of the universe, it has got to be so, because Our Lord Jesus Christ is said to have opened a way to go back to Our Father God, before that time the Bible does not make clear whether we really have a soul or not and if we had a soul what would happen to our souls when we die.
Now assuming or knowing that the number of souls that follow a deity is important, we guess that after our Lord Jesus Christ that is the greatest, the second main portal in line would be Allah (god of the Muslim) that leads back the souls to God of the universe, followed by Hinduism and those religions that come from Hinduism. Here we may have to add that all living souls have a portal, their portal is formed from the spiritual deities or other spiritual force they believe in, it has got to be so, because for God of the universe all living souls are the same and have got a value that needs to be saved, so a portal need to be provided for all souls.
We hope that we have said enough to form a sort of imaginary link, between the living world and the spiritual world, so that, when we talk about the spiritual life force of the universe, our readers will understand what we are talking about; and when we are going to state that there is only one God throughout the universe, they will understand how we got there.
But before we do that I believe that it could make more sense if we would use a couple of articles that we have written for the old version to link to the real beginning of the theory of ‘Reconciliation of the universe; where we state that there is only one God throughout the universe and other religious things. We would like to do that because the hub angel’s greetings is also one of the reasons why I am writing these religious writings, and also, by using the old version it might make more sense, let us link this hub to our, Angels greetings hub, in the hope that it will link better to our theory.
See you in our next article, Angel’s greetings.
May God bless us all?