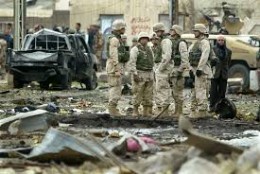 God is crying because the world make war and kill each other, but that is not all they use God's name in vane, when they say that they kill in God's name

God is crying to see all these violent deeds.

God is crying; and I am Crying too


Yes, God is crying and I am crying too, yes dear readers I am crying because of the horrible things that happen in the world today, and those that carry out these horrible deeds want us to believe that their God wants them to carry out such horrible deeds, they even try to make us believe that they do it in their God’s name.
Before today I never thought that I would write this sort of article in my religious writings of Hub-Page, because I wanted to keep them strictly religious; but today happenings have forced me to change my attitude, so I am writing this article here, just because it seems to me that what is happening is partly religious; now because it is partly religious, religion itself may be able to influence the outcome, and perhaps those religious leader that are close to those that carry out these deeds may be able to help, they may help by showing those people that what they are doing is religiously wrong, and therefore should tell them to stop killing, or at least to stop using religion as an excuse to kill, because there are no religions that tell you to kill, because life is precious in God’s eyes.
I believe that I am a religious man and I believe in God, my God is a God of love and he loves all living things because he has given life to every living thing. Here I may have to add that I believe that I am a seer because, I seem to be able to see lots of things that other people seem to ignore completely; so in my religious writings of “Reconciliation of the Universe” I am describing how God of the universe is the future link of all existing religions, because all Gods are linked together, as the spiritual life forces of the entire universe; all those things that I am writing in my religious writings have been written to help solve the religious problems of today; but today suddenly I have been shocked for the second time, just by saying what is really happening to these American journalist, so in my views as a seer I feel that even God is crying.
--------------------------------
God is crying
Yes dear readers, God of the universe today 3 September 2014 is crying; my God of the universe is crying because innocent people are being slaughtered from some people that want the rest of the world believe that they are doing this slaughtering in God’s name, but how far off from the truth they are is incredible, because if God created us or helped Mother Nature creating us, then no God wants to kill his own creation, especially if this is done using his own God name. But let us see what these barbaric people have done for the second time lately.
Here under is one of the links about this terrible news