To understand this article fully, you need to see it in Hub Pages, by clicking on the link above.


What is happening today


Are these religious signs one may ask? 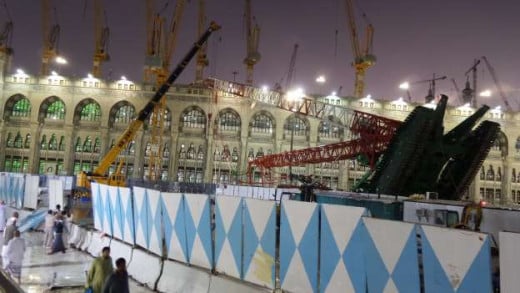 I am sure that in the world today, many people that follow religions are asking; could this be a religious sign that God Allah sends to the Muslim, for what they have done and are doing in the world. Because it seems to me that if there is a God Allah he must be very upset about what his followers have done and are doing, look at this report here,


This is the report on the net


It was reported and I quote the following:


At least 107 people are reportedly dead and over 230 left injured as a severe storm toppled a construction crane at Masjid al-Haram, or the Grand Mosque, in Mecca, Saudi Arabia, on Sept. 11, 2015. The huge crane fell over the roof of the mosque, which was being prepped up for this year’s Hajj pilgrims who are expected to arrive in the city soon. Click through for the latest developments.


Our report and discussions


We are saying this because of the date that this violent natural event has happened: September 11th 2015 just 14 years after the most violent terrorists attack on American soil. One needs really to reflect on this, because if you believe in God and the spiritual forces in heavens you cannot escape thinking about it.


Now that I have said what I think, I am going to wait and see, if and how this event could change the Muslim ways of thinking, I am sure that some religious leaders will offer an explanation about what has happened, whether this explanation will favour anybody we don’t know yet, so we have to wait and see.


Today I would like to say just a bit more, since something else that involves religion has happened; but before we do that let us remind the world at large, the fact that the crane incident at Mecca has happened the 11th of September 2015, this is just 14 years after the terrorist attack on American soil. Now, whether the Muslims see this as a religious sign is up to them and their God Allah.


But, for us that live in the western world and believe in a different God; we hope and wish that this is a sign from their God Allah saying to them; watch what you are doing? I never told you to go around killing people; anyhow that is what we hope it means at least to us, and if this is what it means to the Muslim also; then they might stop to go around killing people like they are doing even now; they seem that want to kill everybody that is not like them; so, if their God sends them sign to make them see that they have to stop what they are doing, it would be a good thing. Anyhow this is how I see this religious situation that is affecting millions of people, as we can see from the news every day that there are refugees running away from their home land, just because they are being driven away form their own Muslim brothers.


Just as I said let us wait and see what the people involved say, somebody commented that it is okay to die in Mecca because it is the holiest place in Islam. So, the Muslims don’t think that this incident of the crane falling and killing some worshipers has anything to do with all the killing that they are doing in the world. But from this side of the world looks different and I tell you why. Today over seven hundred Muslim have died in a stampede. The question here is; does their God Allah like to kill people just like the people themselves; or is this a message to tell them to stop the innocent killing, I just wonder.


Here-under is a link of a video if you want to see it;


Here-under is how it was reported on the internet news, and I quote;


People were going towards the direction of throwing the stones while others were coming from the opposite direction. Then it became chaotic and suddenly people started going down.


There were people from Nigeria, Niger, Chad and Senegal among other nationalities. People were just climbing on top of others in order to move to a safer place and that's how some people died.


People were chanting Allah's name while others were crying, including children and infants. People fell on the ground seeking help but there was no-one to give them a helping hand. Everybody seemed to be on their own.


It affected some members of our group. I lost my aunt as a result of the stampede and at the moment, two women from our entourage - a mother and her daughter - are still missing.


End of the quote.


Under below is another photo of the chaos that followed the stampede.


Comments on the stampede


Comments reported on the news


More than 700 people were killed and nearly 900 were left injured in a stampede on the outskirts of Mecca on Sept. 24, 2015. The latest casualty is the second incident at the pilgrimage this year. The stampede took place as the number of pilgrims heading towards the pillars suddenly increased. Following the accident, 4,000 personnel were rushed to the accident site, along with 220 emergency and rescue units, according to Saudi civil defence directorate. Earlier this month, 109 people were killed and hundreds of pilgrims were left injured after a crane collapsed at Mecca’s Grand Mosque. Here is a look at the images from the site of the accident. End of comments; to be edited later.