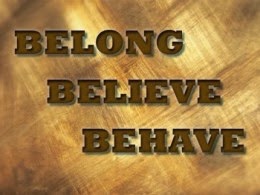 Sometimes people feel like as if they have been called to do something. So they do whatever they thing is right to do.