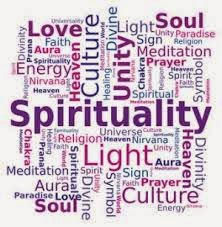 Spirituality has many side and one could look in many directions, as we can see from this photo above, is is something that we need to explore during our life.