Strange news and a miracle

Apart from the links above this is what caught my attention,
Mysterious ‘angel’ priest appears at car crash site 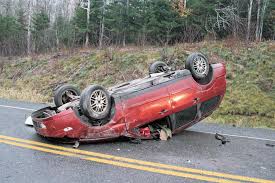 This might not be the picture that was on the news, but it is a very similar crash.

As we all know, religions are based on those events that cannot be explained easily and this can be one of them, today I have found one of those event on Yahoo! news while I was checking my email, having seen that report I believe that this seems to be really one of those unexplainable event, I have copied it to keep a record of what was all about, because some of these events may be called miracles, as there is no easy explanation of what has happened, therefore however believes in God and religion will soon believe that they have witnessed a miracle, so let us see what the news reported.
------------------------------------------
In the Internet news today
Mysterious ‘angel’ priest appears at car crash site
A mysterious Catholic priest showed up to the site of a car crash in Missouri, the United States, with witnesses saying he offered a blessing before disappearing just as quickly as he arrived.
But those at the site of the crash, including a number of rescue workers, are now at a loss after realizing no one knows the identity of the mysterious holy man who does not appear in any of the nearly 70 photographs taken at the scene of the accident.
"I think it's a miracle," Raymond Reed, fire chief of New London, told USA Today.
"I would say whether it was an angel that was sent to us in the form of a priest or a priest that became our angel, I don't know. Either way, I'm good with it."
Reed and other rescue workers spent 45 minutes attempting to remove 19-year-old college student Katie Lentz from the wreckage, to no avail. While Lentz was conscious and communicating with authorities, they said her vital signs were quickly dropping.
Rescue workers were left with little choice other than to turn the flipped car over. But such a move posed a potentially life-threatening injury to the young woman, who subsequently asked for someone to pray with her.
And that’s when the mysterious priest reportedly appeared, saying “I will,” praying with Lentz and some of the rescue workers and sprinkling the young woman with oil.
Reed and his team then turned the car over and freed Lentz, who was taken by helicopter to a nearby hospital.
But when Reed and other emergency workers tried to find the priest to thank him, he had already left the scene.
"We all go back to thank this priest and he's gone," Reed said.
The man was described as being in his late 50s and dressed in full priest’s garb.
“Where did this guy come from?” added Lentz's friend Travis Wiseman . ”We're looking for the priest and so far, no one has seen him. Whether it was a priest as an angel or an actual angel, he was an angel to all those and to Katie.”
"We're all local people from four different towns," Reed said, noting that police had put up barriers to the crash site for two miles in each direction. "We've only got one Catholic church out of three towns and it wasn't their priest."
"I have 69 photographs that were taken from minutes after that accident happened — bystanders, the extrication, our final cleanup — and he's not in them," Reed added. "All we want to do is thank him."
Lentz’s mother says her daughter is recovering from her injuries and gives the mysterious cleric credit for helping her pull through in her time of need.
"I do believe he certainly could have been an angel dressed in priest's attire because the Bible tells us there are angels among us," Carla Churchhill Lentz told USA Today.
-------------------------------------------
This is what was reported in Yahoo! news, we would like to know whether that priest could and would be found, otherwise we really have to think that this is a miracle, and the priest was really an angel that has come from the other side to help the young victim.
May God bless us and help us to understand these events?