MAN NEEDS GOD. We believe that, there is only one God throughout the universe and God is the universal life force that guides and gives life to the entire universe. Therefore every living thing is part of God life force, since God is the essence of all life in the universe.
-
Welcome to our blog, Man needs God
and this post, New religious order
- 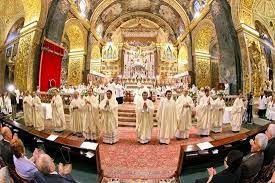 One of today religious order ceremony

For complete reconciliation a new religious world order is required.
Perhaps the main reason why we are writing these religious writings is that we would like all religions to be reconciled to each other; so that in the future they could not have any reason to fight each other any more. We believe that the reasons why they have not been able to reconcile until now has been because each and every religious group believes that they are right in believing in what they are believing in, and it is the others that have got it all wrong.
Therefore, the only way to overcome that is to show them first that they might be wrong themselves in assuming that they are the only people that have got it right, and then proceed to show them than the others believe in the same God almost in the same way as they do, so they have got a lot in common, and therefore, it would be possible for them to believe in religion without arguing. Then suggest that it would be wise to start a new religion, which would incorporate all existing religious groups, and at the same time this new religious order should be able to satisfy the needs to each and every religious order. So, for world complete reconciliation a sort of a new religious order is required.
How to start this new world order is hard to say now, but somehow it must be done otherwise mankind could be lost forever in a religious way, and if and when that happens and all people don’t believe in any religion or God, then, because we have moved away from God’s positive life-force, God’s life-force cannot be in touch with us, and therefore, God protection for the human race will be lost; you see there are reasons to believe that life, the spiritual world and God are all linked together and they help each other, as long as they are linked together, but if the link is broken, because we don’t believe in God anymore, then the life force of God would not be able to help us because we are not connected; therefore then, to live a normal life would become a lot harder, in fact, in the end it might even bring mankind life cycle to an end and we may disappear from the face of the earth completely.
But we believe that there could be a way out for us from this possible religious disaster, if we believe in God and really try hard to find our way for complete world reconciliation. In order to achieve that some of us need to learn about all the world existing religions or at least the main religions, so that we would be able to compare them together and find what they have in common with each other. Then we would be in a better position to suggest to the world, which is the best way to reconcile those religions together, as our knowledge of the religious situation is increased by learning about them.
Perhaps by learning about them we could formulate a new way of religion, which would be able to include all sorts of religions and it could and could or would bring the whole world to a religious universal reconciliation.
This is what we will try to suggest in the later part of our writings, which for the time being we would like to call Reconciliation of the Universe, because that was the first name we have given them, even knowing that such name would be an exaggeration, because we will never be able to achieve or even hope to achieve complete reconciliation the whole process should be achieved step by step, and therefore it is going to take a while to come close to any sort of universal reconciliation.
Dear readers, let us explain our writing position now; you see, here we would have liked to write some important religious dreams, but we cannot do that because we have already published them in our hubs; we would have liked to do that in order to show you the link between what we have written above and what is going to be written next. Anyhow, somehow we are going to tell you what these dreams are about. Because one of those dreams has lead me to write these religious writings here, which I have called; The most important dream of my life and this dream is really the dream that has started me writing about religion, then there are several more religious dreams that I have already published in the hub of, Manfraco Spiritual Dreams. I have written about them already, because they have special religious meaning for me, as I said it was one of these dreams that started to drive me back to God and religion, and my religious beliefs nowadays have become so strong that I have to write them down, in order to find my inner peace.
----------------------------------------

How can we find the right way?

While I am writing these religious writings of Prayers for Reconciliation, in order to find my inner peace, I hope and also I want to believe that perhaps one day these religious writings could be able to reconcile everything together, and so prove to be a good religious theory for all humanity, then mankind would have to accept our religious writings and adopt them, and therefore then these religious writings might become the beginning of the new World Religious order and consensus, and also the beginning of, The New World Religion for all humanity. Perhaps then they may indeed be called Reconciliation of the Universe.
Dear readers, while I am writing this chapter I have been thinking that perhaps I should call on my religious friends and have a religious discussion to see if they believe that there is a possible way to achieve what we have written above.
Perhaps we may have to discuss all sorts of religious books and the reasons why they have been written the way they have been written, these same religious books and their application at the time when they were written, and how they may fail now because of the different ways and values that mankind has today. Perhaps then, we could be in a better position to say what could be done in a religious way.
Now that we have stated our intentions, let me say a prayer to God Most High, so that God can guide me to write, these religious writings the right way; now this is going to be a prayer to our future God, so it might sound a bit different to our normal prayer.
PRAYER
In the name of God-Most-High the most Holy, who is the very centre of all known and unknown gods within the universe, because they all were born from Him and they are part of Him, who has been is and will be the active life-force of the whole world, he is the life giver and creator of the whole seen and unseen worlds, so he is the Father of everything, we all owe our own lives to him and therefore it is our duty that we should serve him while we are alive and to him we should return when we die.
To you I turn God-Most-High and pray in the hope that you would help me find a way how to write these religious writings of, Reconciliation of the Universe.
Father, hear my prayer and help me!
Next post is about religious discussions, see you then.
May God bless us all?
--------------------------------------
Man needs God
New religious order
IS TO BE CONTINUED;
Next time with, another religious post
-------------------------------------
Some personal and religious links:
http://menfranco-re.blogspot.com/
http://ifyoubelieveingod.blogspot.com/
http://manneedsgod.co.uk
http://frankmenchise.com
http://diybrickwork.com
http://frank-nrwo.yolasite.com
http://menfranconewworldorder.yolasite.com
http://myreligioustheory.yolasite.com