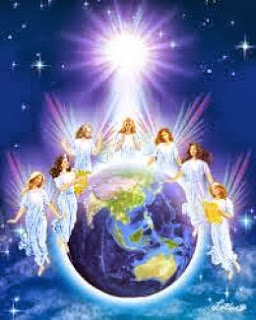 Dear readers this photo shows you only angels surrounding out planet earth. You see it is impossible for me to find a photo that describe what is being said in the text. So you have just to imagine it for yourself.

Dear readers, this post is the continuation of our last post, angels and human souls, where we were describing the sixth circle positive, so, let us continue to describe now the souls before birth. In the folklore beliefs of life and souls, it is believed that, to be born on earth a soul must go through a process and then cross a barrier, but when this soul crosses the barrier it will forget everything, so that, that soul will not remember where it came from, and will not remember whether it has lived before another life. Then the soul is ready to become a person, and at the moment that a newborn child takes the first breath, it will enter the body of such a child and become God’s own seedling.
The angels in charge of the life giving group take great care of the souls in circle number six positive, and they make sure that only the most suitable souls are sent to earth to become people.
Therefore, while most of the glowing bodies of life-energy stay put in circle number six, most of this life-energy floating in this circle may only be allowed to become animals, and only a small selected amount will become people, the rest of it can become anything, but whatever they become they have to be always near the same value as they are within the circle: So that, a large glowing body may become a large animal, and a very small glowing body may become only an insect.
Therefore, the task of the angels in circle number six is thus divided:
Group one is to select and take care of the most suitable life-energy units within the circle, who could be able to become good people, and then they get them ready to give this selected God given life-energy to the new born human babies when they are born, hoping that they would live their earthly life according to God’s benevolent will, and therefore they would become worthy to move up the ladder when they return, and be able to enter paradise in god’s heavenly reign at their return, after being accessed by another group of angels.
The angels of group number two is to collect all the people souls when they return after their death, then they will have to evaluate them according to their deeds that they did during their life on earth, and if they have done good deeds, like they have believed in God and followed his commandments, and therefore they have become better souls, then they may be given a better place in circle six positive, or if they have been exceptionally good and they are free from sins they may go to paradise: But if they have become worse during their life on earth, then they have to move to a lower place in circle six positive, and if they have been really bad during their life on earth and they are full of sins, they may have to go to circle six negative, since they have become negative, and this is where the negative force will decide what to do with them. (We will describe the sixth circle negative when we come to it).
Then there is this third group of angels that are the guardian angels, they don’t have any power to do anything special, but they are the helpers’ who help the angels in charge in circle six positive to get the souls ready, and when the souls of these persons are ready they are send to earth to live their earthly life. Now because the guardian angels are the only angels allowed from God to come down to earth, one of these guardian angel will be assigned to follow one of these souls and try to council it to live according to God’s will, in the hope that it will become a better soul. Here we have to add that many religions believe that this is true, so, they may be true indeed.
Dear readers, this is how we could imagine these heavenly things that make life possible on earth. Now, we would like to add at this stage that we would like to remind our readers that all this theory of Reconciliation of the Universe above had been written when I had that supernatural encounter. Therefore, in a way I am lead to believe that I may be very close to the truth, otherwise, why did these angels come down and greet me as the writer of Reconciliation of the Universe? See this link about my encounter; Pre Reconciliation of the Universe
This article has become too long to continue, so see you in our next article where we are going to describe the, Nature of the universe and earth; see you there.
May God help us understand his will?
May God bless us all?
-----------------------------------
Man needs God

Posted by http://menfranco.blogspot.com at 4:04 PM No comments: