MAN NEEDS GOD. We believe that, there is only one God throughout the universe and God is the universal life force that guides and gives life to the entire universe. Therefore every living thing is part of God life force, since God is the essence of all life in the universe.
-
Welcome to our blog, Man needs God
and this post, Angels, saints and human souls
- 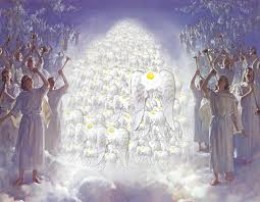 This is an imaginary description of how we see paradise. Paradise is a beautiful place to be enjoyed from worthy souls. Usually there are special happy events and therefore, many times a multitude of angels and souls in paradise come together to enjoy those events.