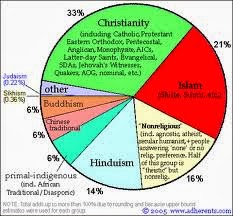 There are many religions in the world, what is shown here are the main religions grouped together