MAN NEEDS GOD. We believe that, there is only one God throughout the universe and God is the universal life force that guides and gives life to the entire universe. Therefore every living thing is part of God life force, since God is the essence of all life in the universe.
-
Welcome to our blog, Man needs God
and this post, The western world religions
-

The Bible is the most read religious book in the world. From the bible many religions were born. 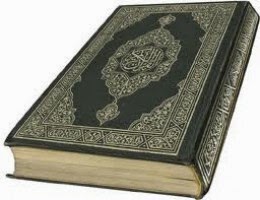 The Koran is like the Bible for the Muslim people

Today western world religions
Most of the western world religions as we know them today start with Abraham and the Bible. The Bible in reality is a history and religious book of the Jews. Most of us believe, or have been thought to believe that the Bible is the written word of the living God, as God has spoken through his prophets.
As most of us know the Bible starts with the book of Genesis, and it starts with God creating the world, and from there it tells us briefly what happens from the creation of the world to the times of Abraham.
When Abraham was 99 God appeared to Abraham and said I am El Shaddai (God almighty) Walk with me and be trust worthy. I will make a covenant between us and I will give you many descendants and many other things God said to Abraham.
With the covenant with God start the story of Abraham and the descendants of Abraham. Today some of the descendants of Abraham are known as the Jews. In a nutshell sometime later on, the Jews become slaves of the powerful Egyptian king, they cry to their God to help them, and God delivers them from the Egyptians with the help of their leader Moses, who has met God on Mount Sinai in the form of a burning bush, this burning bush talked to Moses and said that his name was Yahweh (which laterally means, I am who I am) the God of Abraham and he wanted to deliver his people from the Egyptian Faeroes. So, God then told Moses to go back to Egypt and help rescue his people.
After a long argument with the Egyptian Faeroes with the help of Yahweh Moses succeeds in freeing the Jews from the Egyptian Faeroes and they leave Egypt to go to the Promised Land. In the way to the Promised Land the Jews don’t do what Yahweh wants then to do and believe; and Yahweh punishes them by making them stay for forty years in the desert, that is until all those who did not believe in God were dead.
In the end the Jews reach the Promised Land and stay there for a very long time under various leaders the most known and mentioned even these days are Salomon and David. In the Bible through his prophets Yahweh promises the Jews that from the line of David will be born a man with great powers and he will be the messiah to the Jews and the world, this great man will let the world know about everything that there is to know about religions and lead the world.
So, the messiah is born in the form of our Lord Jesus Christ at the time when the Promised Land is occupied from the Romans; the Jews hope and believe that the messiah is going to be their king and be able to deliver them from the Romans that were occupying their Promised Land. But when they saw that Jesus Christ was not what they wanted him to be, they found a way how to eliminate him by crucifying him with the help of the Romans. But the follower of Jesus Christ continued to believe in Jesus Christ and thus a new religious era was born, Christianity. At the same time the Jews rejected Jesus as the messiah and continued in believing God in the same old ways of their religious order.
-------------------------------------
There are many Christian religions
Christianity is a general name that includes many religions; they all come from the Bible.
So, as we can see Christianity is a continuation of the religious laws and beliefs of Abraham and Moses, but after the death of Jesus Christ and many other happenings it split away and became another religion in its own rights as we know it today. Of course Christianity took a long time to become the main religion of the western world as we all know, because at the beginning it was not accepted and many people died martyrs just because they believed in this new religious order of Christianity, history is full of many prosecutions that the new Christian had to endure before they became accepted as a religious order. There are reasons to believe that Christianity became accepted under the Roman emperor Constantine the great early in the fourth century AD. Emperor Constantine was the first Roman emperor that converted to Christianity.
Christianity nowadays has got several orders like the Roman Catholic, Orthodox, Lutherans, Anglicans and many others. As we can see all these religions have come from the Bible, and one can go on talking about these religions for a long time, if one has to explain them better, So, I better stop talking about them now, as there is another main religion that I would like to talk about now, which is the Islamic religion.
-----------------------------------------------

Islam, Koran book is their Bible.

Islam religion
There are reasons to believe that the Koran also comes from the Bible, and even though today we (the western world) seem to be so far away from our brothers Muslims the fact remains that they are descended of Ishmael first son of Abraham and Hagar the Egyptian maidservant, then Abraham had his second son was Isaac with his wife Sarah: These two are the most important two children of Abraham, and therefore we can say that through Abraham we are brothers with the Muslims.
Now, I would to say that we should really try at least to read some of the Koran, so that we might be able to understand what these Muslims are talking about. Therefore we need to put aside those extremists fanatic that in their twisted way seem to think that they need to kill those that do not follow their religion.
Anyhow, I have read part of the Koran and it seems to me that God is the same God of Abraham, and it says so many times, the only difference is that they call their God Allah instead of Yahweh, and have many different laws compared to our laws. So we still need to learn a lot more before we pass our own judgment on this religion?
(Writer comment) So hereunder is a link that might take you to the Koran, let us hope it works in hub pages.
The Koran -- Simple Search
----------------------

I need to say that there are a lot more religions in the world today which have come from different civilizations, and we could go on and make a list of them all and it will be a long list. Anyhow here and now, our task is to find which one is the most suitable to use, or to make up another religion capable of satisfying the human need for religions. As we have already said before, Man needs God. And we have also said that God is hope for those who need hope most.
That is all I want to say now, as my speech has been too long and some of you wonder when I am going to stop. Thanks for listening anyhow.
----------------------------
Frank short comment
At the end of Mark speech we all were congratulating Mark and saying that he knew more than most of us about religions, and that we surely would reflect on what he had said: I said I am sure that our friends here are going to discuss a lot more about religions because of what you said, so let us see what they are going to argue about soon. Look over there, I see our friend Gino looking at John as if he wants to speak to him, perhaps he is going to have a good interesting chat with him presently. We might even have a laugh Ha, ha, ha.
My dear readers, let us postpone what Gino and John are going to argue about for next article, because I believe that I have said enough in this post. But, let me say briefly what sort of conclusion we can find in Mark speech. The only conclusion that I can see, is that there is no conclusion at all, because religions are very complex and we are going to need a lot of time to sort them out, if we have the courage and strength to continue to look for a solution.
My dear readers, this is not the end of the meeting and if you would like to see what happened next at the end of Mark speech you have to wait when I post our next article; Religious discussions three.
--------------------------------
Man needs God
The western world religions
IS TO BE CONTINUED;
Next time with, religious discussion three
-------------------------------------
Some personal and religious links:
http://menfranco-re.blogspot.com/
http://ifyoubelieveingod.blogspot.com/
http://manneedsgod.co.uk
http://frankmenchise.com
http://diybrickwork.com
http://frank-nrwo.yolasite.com
http://menfranconewworldorder.yolasite.com
http://myreligioustheory.yolasite.com