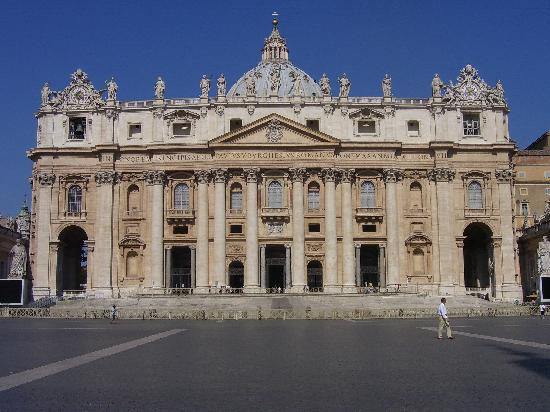 St Peter basilica in Rome is one important place of worship

These are the ten Commandment, they are supposed to be the rules the Yahweh God of the Israelite gave Moses for the Israelite, and the Israelite had to follow these rules.
Mankind religious beliefs

Welcome to our hub (33), of mankind religious beliefs.

May God guide and help me to say the right things in these religious writings?
Dear readers, as we have maintained throughout these religious writings, and we will continue to maintain our beliefs that we need God and religions; even if sometimes religions seem to cause some trouble in the world, as we are going to explain later on in this article. You see, we believe that if we were to follow what the atheist’s say that there is no god/s, and therefore there should not be any religions either, but that would not be acceptable to mankind, therefore, we have to accept that mankind needs religions, one way or another; this is obvious from the fact that there are so many religions in the world of today, as it has been in the past and it will be in the future.
Today some of the main religions are: Christianity, Muslim religion, Hinduism, Buddhism plus other religions, we only need to look at the several places of worship to understand that religions are very important to all mankind and therefore they are here to stay. So, in this hub first of all we would like to look at these religious beliefs and then explain what we are doing with our religious writing and what we would like to do in a general way; in a way we are studying all sorts of religious behaviour that we happen to know today, so, when we talk of this and that religion and any religious issues we would like to test those religious grounds, so to speak and see what we can learn from them, and if it is possible to suggest any improvements.
Anyhow we have called this article, mankind religious beliefs, so, now we have to explain what we mean by that; you see we would like to learn and know what people think about religions, because as we all know as soon as one talks about religions or religious beliefs, one wants to asks many questions about religions: Why mankind needs religions and believe in God? Could it be that religion an inborn sixth sense within us, or we just believe in what we have been told to believe? Does religion explain why we are here on earth? Why and when men change their religious beliefs during their lives? And many other questions come to our mind that is hard to answer.
So let us see if we can answer some of these questions above, in this hub or the many religious hubs that will follow, we are saying this because we know that we are going to talk for a long time about this subject; but first of all let us tell our readers that they are safe to believe whatever they want to believe, so let us write something for our readers’ peace of mind, as we have done with other religious articles.
---------------------------------------
For our readers' peace of mind
Click edit above to add content to this empty capsule.


Written for our readers’ peace of mind
To anyone who is a believer and believes in God and other religious beliefs, please read our Prayers for Reconciliation writings fully before you pass judgment and quit reading; you see Prayers for Reconciliation is only an idealistic theory, which through discussions with other fellow believer (and perhaps non-believers) is trying to find a way on how to link all existing religions together, in the hope that they would not be able to fight each other any longer in the future, since today there are many violent acts or even wars that seem to come from religions. For this reason we are also writing a futuristic religious theory called, ‘reconciliation of the universe’ that will describe the spiritual world in a different way, or we should say, we are going to describe this new religious theory in a way that would make sense if we use our logic reasoning using what we know today, or what we believe that we know today; this theory will be called, Reconciliation of the universe, we hope that this new theory might be able to achieve just that.
WHAT WE WOULD LIKE TO DO AND ACHIEVE
We will have to set the stage for the entire world to see.
And whoever will read these writings may have to agree.
That here we are trying to find a way to God for all humanity;
In order to stay in touch with God existing life-force for eternity
So, every day I am praying God to guide and help me.

So, before I continue to write any religious issues, let me say my prayer to God Most High, master of the universe and life giver to every living thing, so that I can feel more comfortable writing them?
Prayer
In the name of The Father, The-Son and The Holy Spirit; Almighty Father, I pray you with all my heart, my soul and my mind earnestly, hoping that in your mercy you would forgive me all my life sins and make me clean of any impurities that may affect my soul, so that I would be worthy and able to write these religious writing that I am writing here according to your will. Father, hear my prayer and help me!


Now that I have prayed God Most High, the way that I see God would be in our religious theory, I feel more confident to write the following religious writings, so let me try to explain, what religion is for me and perhaps for most of us.
----------------------------------------
Anyhow, in this hub we will be talking about first of all; Mankind religious beliefs; 2, What life throws at us affects our religious behaviour; 3, What are religious beliefs and 4, Explaining my position as a writer.
---------------------------------------
These are mankind religious beliefs
Click  above to add content to this empty capsu
We the people of this world even today are still in search of our own religious beliefs, because we would like to know how they all started in the beginning, therefore it would be wise if we can start looking from the beginning of our life and see what sort of evidence we can find out for ourselves; we know that this has been done many times already from our previous generations, but it seems that this is the only way to go about, if we would like to know more.
When a human being is born he (here he represents all mankind) knows nothing about religion or anything else, all Mother Nature has given him is a sixth sense so to speak that will help him to survive and thrive, so, he quickly learns how to drink his milk and how to get his mother attention, so that, he may feel secure in her arms in order to survive. If there is within him a sense of religious belonging and beliefs nobody knows at this stage, (for my own part I have to say that I don’t remember anything at all, of my very young life).
But then, as he grows up slowly he learns his mother’s tongue, and through this language he’ll learn everything that is useful to survive according to his parents’ knowledge, he will also learn about religious beliefs according to his parents own beliefs. Therefore, if his parents are catholic he will be catholic too, if his parents are orthodox he will be orthodox too, if his parents are Islamic he will be Islamic too, if his parents are Buddhist he will be Buddhist too, he can also be of many other religions, which would make a long list if we had the knowledge to name them all; Anyhow the point is here that he will be believing in the same religion as his parents do while he is young, since that is what is being taught, irrespective to which religion they may belong and no matter what language they may speak.
Now we want to point out to you that notwithstanding all these different religions, which we may be believing in, and all those languages that we may be speaking, there are also a few other things left in common to us no matter where we come from, which is that most of us believe in some sort of god and religion or a sort of spiritualty; we have also within ourselves that inborn will to survive which wants us to live forever, which will stay with us all the time until we die, and perhaps beyond it, in our afterlife.
So, it would seem obvious that the will to survive would be attached to religious beliefs as well, because religion is the only thing in this world that could give people some hope to live forever, even if we are talking only about our afterlife possibilities.
---------------------------
Life affects our religious behaviour
Click  above to add content to this empty capsule
Whatever events we experience during our life, it will affect our religious behaviour in many ways it is only normal; therefore not withstanding this need of religions that we have as we have said above, and also to fulfil the will to survive forever that we carry within us and other things as well, I believe that we slowly change our point of religious view; after all man has also his own mind that decide what to do with what he has learned during his life, and sometimes he makes some wrong decisions because he believes in himself too much for his own good: