MAN NEEDS GOD. We believe that, there is only one God throughout the universe and God is the universal life force that guides and gives life to the entire universe. Therefore every living thing is part of God life force, since God is the essence of all life in the universe.
-
Welcome to our blog, Man needs God
and this post, Importance of religion
- 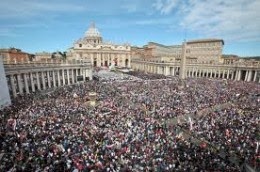 When there is an important religions event, people come to the event in thousands, this goes to show that religions are very important even today. Look at this big crowd in Rome.


Importance of religion
This is a study of religions and how they serve humanity
May God help me to say the right things in these religious writings?
About religious beliefs
Today people sometimes are not sure about religious beliefs, so, one may ask: Is religion really important and necessary to exist for all humanity?
The answer to this question is definitely yes, because really religion is very important to humanity.
So, let me try to explain in my own ways the Importance of religion. I believe that religion is necessary and also very important to every living soul, because it is in our nature that we need to believe in God and religion in order to have a meaningful life, you see, we have always felt the need to believe in a higher power, which we like to turn for help when we are not sure about ourselves; we need religion also to explain our own existence, and if we don’t believe in any religion then we might feel that life is meaningless. And therefore we will start asking questions about our own existence and this again will show us the importance of religion.
You see, we need only to look back at the history of mankind, where we will find that there have always been many religious beliefs; we will find that all sorts of civilizations had their own religious beliefs. Even though most of those beliefs nowadays have been proven to be untrue, never the less they were very helpful to the people of those days, because they helped to create a meaningful life for them, since their religions helped them create a way of life according to their own beliefs.
Wherever we look in the past we find evidence that people have always believed in some sorts of religion, with gods who were more powerful than themselves (that is us humans), which we humans liked to turn for help when we would find ourselves in a awkward and dangerous position. Most groups of people and entire civilizations have also believed in the afterlife, which would give them some sort of immortality, since no one likes to die and disappear forever. Some of these religions proved to be good in the ancient world, some of them were however not as good, and a few of them were really disgusting, as they believed in human sacrifice in order to keep their gods in a favourable mood for the rest of the community.
Today most of these ancient pagan religions have disappeared and they have been replaced with Christianity, but some of those archaic religions have left the signs of their existence. So, nowadays there are still statues of gods and goddesses to be seen; there are ancient books where one can get some ideas of what some of these religions were like; there are some words in our language which come from these ancient beliefs; as there are the names of the planets of the solar system, which come after the name of gods and goddesses; in everyday language, love sex and sexual diseases, they all seem to have something to do with Venus the goddess of love; and also many more other signs of their existence ancient religions have left behind. I believe that it would be a good thing if some of those beliefs were written down in here, so that we could remind mankind from where those meanings have come from, and they could also be used in religion not as a belief to believe in; but just to learn and compare with the belief that mankind has always had the need to believe in something higher them themselves.

Before I say anymore about this religious subject, because this subject is controversial let me say something to my readers:

Written for our readers’ peace of mind
To anyone who is a believer and believes in God and other religious beliefs, please read our Prayers for Reconciliation and Reconciliation of the Universe writings fully before you pass judgment and quit reading; you see Prayers for Reconciliation is only an idealistic religious theory, which through discussions with other fellow believer (and perhaps non-believers) is trying to find a way on how to link all existing religions together, in the hope that one day they would not be able to fight each other any longer, because religions would become modified; Reconciliation of the Universe is the theory that might be able to achieve just that. So that in the future mankind can live a better life.
----------------------------------------------
WHAT WE WOULD LIKE TO ACHIEVE
We will have to set the stage for the entire world to see.
And whoever will read these writings might have to agree.
That here we are trying to find a way to God for all humanity;
In order to stay in touch with God-life-force for eternity
So, I am pray to God and his heavenly angels to help me. ﻿
---------------------------------------------
I AM PRAYING GOD FOR GUIDANCE.
Our Father in heaven, to you I turn God Most High, and I start to pray with all my heart, my soul and my mind. In the name of The-Father The-Son and The-Holy Spirit I am praying, hoping that the ever present guiding force of the Holy Spirit on earth would guide me; So that, I would be able to write my religious writing as humanly as possible according to your will. Father, hear my prayer and guide and help me! Amen.
---------------------------------------------------------
Beliefs and spiritual consciousness
Having looked in general terms about the old religions and the need we humans have for religions, let us now look at our own beliefs and spiritual consciousness that we have of ourselves today? We all know that religion and religious beliefs are very complex and there are many other things to keep in mind and follow as well. Because everything we do or believe in life has got something to do with our conscious or subconscious mind and therefore our own spiritual beliefs, it has always been like this and we have to find our own ways and beliefs.
Therefore, at this point of time one may ask the following questions, just to clarify the situation. We would like to know now, what do you mean by conscious and subconscious mind? What would be your personal religious beliefs, since you believe in religions? And, what were those old religions like and where did their beliefs come from?
We have reasons to believe that our consciousness or subconsciousness have always played a part in religion, because most things that we believed a long time ago, we are still believing today, so, this field of consciousness is very wide and includes many things, one of this examples could be found in our dreams, the old religions and today religions they both take into consideration our dreams. Now, here I have to admit that what is going to follow may seem to some of you dear readers that I am changing subject, but I am not, as I am still talking about religious things in my Prayers of reconciliation writings in this popst called, Importance of religion.
You see, since the beginning of recorded time, people have always believed that some dreams may indeed come from our spiritual side; so, one has to accept that perhaps dreams are indeed a way of communication between the living and the dead, or if you want between the living dimension and the spiritual dimension, which our conscious or subconscious mind could be able to communicate at certain times.
Therefore, one would say that when we are sleeping, we could be in a position to communicate with the spiritual world; I want to say this because what follows hereunder are a few religious dreams, which I dreamed and they seemed so real to me that I felt that I had indeed met these spiritual forces in my dreams?
Now, as the writer of these Prayers of Reconciliation religious writings, I am going to describe to you my personal religious beliefs and also my dreams; my personal religious beliefs are those of a modified Roman Catholic person, I am saying modified because there are some issues that I do not agree completely with this Roman Catholic religion.
Anyhow in order to give you an insight of my religious beliefs I am going to tell you some of my religious dreams, as you all know dreams usually reflect the inner most part of what a person belief are. I want to do this because last week in the Hub Pages I wanted to reply to one of those questions that asked, about having a relationship with Jesus Christ, since I could not answer that completely, I said that I would answer it in my next post here, so here I am, and I am going to tell you my religious dreams about our Lord Jesus Christ.

Posted by http://menfranco.blogspot.com at 2:21 PM No comments: