MAN NEEDS GOD. We believe that, there is only one God throughout the universe and God is the universal life force that guides and gives life to the entire universe. Therefore every living thing is part of God life force, since God is the essence of all life in the universe.
Dear readers, we are continuing our previous discussions about the existence of the spiritual forces. 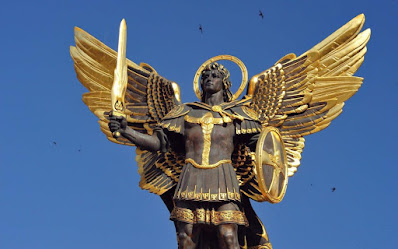 The archangel Michael gave me an angel that would accompany my in the circle of hell.

May God guide and help me to say the right things?

Dear readers, Fifth circle tormented souls is another link that describes the spiritual life cycle of the universe. This will be a longer that usual blog, because it has been a long time since we have written anything in this blog.

Anyhow, we have said that the negative circles can be spiritually dangerous, so, we must protect ourselves by praying God. Therefore, to protect yourself in this negative circle say at least a short prayer to God, even if you say; My Lord God, protect me from the forces of evil, while we read or write this fifth circle negative.

I believe that we must pray, when we talk about spiritual things; I pray to make sure that I am protected. I hope you understand that it is necessary to pray for protection. It will make you feel safer.

I know that you are thinking that this is all an invention of the writer mind, so, why we should pray if these things may not exist? Okay, I admit that these religious writings are an invention of my mind; but what about if this invention has come to me because I believe in God and pray God; so, God has guided me to write what I am writing now. Anyhow, this knowledge is part of the life forces of God of the universe, and through the cosmos of the universe, God bestows it to anyone he likes.

My prayer for the fifth circle negative

These are my thought and prayers for the fifth circle negative, I feel the need to pray again, because I am worried to talk about these negative circles; and thus, I pray:

To Yahweh our Heavenly Father I pray here with all my heart, my soul and my mind. I am praying because I fear the force of evil in this fifth circle negative, while I am mentally visiting it and then writing about it.

My Lord God help me, by letting me see what is right and what’s wrong to write here. So, Father let me see through my mind eyes what I should write, then write it in such a way that I will not upset anyone, and that what I write here is as close as these spiritual things are. I ask you Father to help and protect me in the name of our Lord Jesus Christ. Father hear my prayer!

Entering and praying in the fifth circle negative

And then in a corner in very small letter it says; there is only an exception to this rule, it does not apply, when it is the express will of God, and those who come to visit come in God’s name.

This is what is written at the entrance of Hell, in all languages; and there are voices saying the same thing in all languages as well. Anyhow, let us go in and visit this circle in the name of God, since we must invoke God in order to be able to return to our own earth circle safely.

While I am going in the fifth circle negative I am saying this prayer aloud: I come in the name of God the Father and our lord Jesus Christ the Son, I come in the company of this angel that the Archangel Michael has given me, to protect me and make sure that I return safely to Mother Earth circle, at the end of my visit of the negative forces of the universe; I am saying this, so that you know who has sent me, so, allow me to see what is in here, because I need to report what I have seen in writing, when I go back to mother earth circle.

This is how I mentally imagine the fifth circle negative:

This circle is what is known on earth as Hell. In this circle there are the souls of people that have lived their lives in a detestable way, and those who deny God forever. Anyhow, the souls in this circle are here to stay, for a long time and even forever; they are not the worst souls because the worst souls have been moved to the other lower circles, closer to circle one negative and the abyss, where even the souls will die forever.

Therefore, you may guess that souls like Attila, Stalin and Hitler and others mass murders that have lived in the world and done violent deeds have gone past this circle quickly; they have been moved in a lower circle, because they are very negative and restless, as they have their own violent ways and cannot change.

But you see, for these souls is not easy to do what they have to do, because of the negative energy within them, so, they behave badly and are punished, so, we could not say that the negative angels are punishing them, because they like to punish them, it is more like a reaction that cannot be avoided, because those souls need to be controlled, if they are not controlled the entire circle may become unstable. 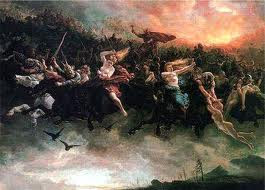 Anyhow this photo above wants to describe a scene from Hell, in the fifth circle negative, where the souls of dead people are constantly tormented, because of their negative disposition.

Who are these souls?

Who could be these tormented people souls?

We need to say that there are many tormented souls in this negative circle, that to make a list of them is impossible, but we will try to describe a few of them, hoping that the life force of God of the universe helps us see what we need to say.

So, let us start from the better ones; there are some souls that should not be there, as they have lived their lives in a way that has helped humanity, but they have denied the existence of God, and they have tried to influence other people to believe in the same way; we can say that these are the better people of the atheists group.

Next to them in a worse spot there are the atheists, who not only have denied God, but they have also called God’s name in vain, calling God all sorts of names, but now they are ashamed of themselves for having done that; and then there are the atheists, that did not want to believe in God, so, they did nasty things against humanity. Even murders were on their mind, to satisfy their own wants. These are the worst of the worst of humanity that are in this circle, but most of them have already been moved out to the next circle, which is stricter and controlled from powerful negative angels.

Of course, there are other souls that belong to other groups and religions, these souls have done nasty deeds during their lives, because they did not know better, as they had never learned about these spiritual things and therefore, they are in this circle of the painful and tormented souls. This circle stops short of having those souls that during their live have willingly killed other people, these souls are housed in the next circle and past next circle, where they are strictly watched from the negative angels and punished when they don’t behave the way they are supposed to behave.

As we have said, there are lots of souls in this circle, and we can go on telling about them for a very long time, if we want to describe most of them properly. But I have no intention to do that.

There could be a lot more to write here, but I do not dare to write it. You see, my dear readers, even though I have prayed God for protection, I am still worried to write about this negative circle; therefore, I am trying to keep it as short as I can. See you in our next article, where we will be talking about, Circle four negative More Hell Tormented Souls.

May God guide us to understand these spiritual ways.